Do you believe there could be a way to embrace the fullness of God revealed in other religions in Paul’s writings? 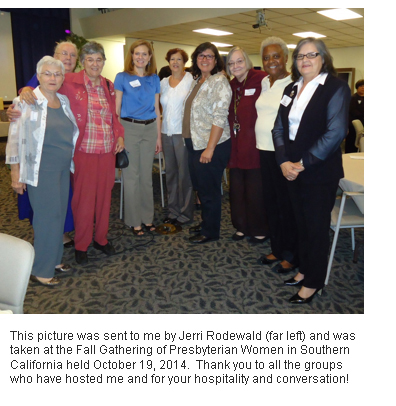 Throughout my travels in recent months to introduce Reconciling Paul I discovered that Lesson Three generates a great deal of debate.  There are many faithful Presbyterian Women who raised important and critical questions about observations that I make in Lesson Three concerning the belief that God exclusively reveals the path to salvation in Jesus Christ.  I am always grateful for your questions.  I kept a record of the questions I was asked at different gatherings so that I could try to answer them more fully in the blog.  One friend who I met at a workshop in North Carolina asked, “How would my faith look and be practiced differently if my belief in Jesus as the only path to salvation changed?”  Her thoughtful and serious question is worthy of attention.

I want to invite us to think together for a moment if there are ways to embrace the fullness of God revealed in other religions through Paul’s writings.  I believe so. How would that make our faith look and be practiced differently?

One way we can begin to embrace the fullness of God revealed in other religious traditions is through Paul’s identity as a Jew and a follower of Jesus. Remember that in the context of ancient Judaism Paul’s belief in Jesus wouldn’t have made him any less Jewish.  Maintaining identity was critical for Jewish people who represented a minority group (the only monotheistic religion) in the ancient Roman Empire. Jews in the first century were concerned about others becoming part of the community without making any commitment to the living out of the covenant through the established group identity markers, such as circumcision and dietary restriction. How did Paul respond to questions about the inclusion of the Gentiles as part of the community of faith?  Paul, representing a more progressive Jewish voice in his time, errs on the side of inclusion. Why? He writes “all of us … are being transformed into the same image from one degree of glory to another …” (2 Corinthians 3:18).  Paul enlarged his understanding of the community of faith by crossing well-defined boundaries of religion, race, and ethnicity.  That was certainly surprising for his time.

Another way we discover a basis in Paul’s writings for a contemporary notion of religious pluralism is in the passage that you will study this month as you engage Lesson Three.  Paul writes about “old” and “new” covenants in 2 Corinthians 3:1-4:6. In this passage, he uses the terms “old” and “new” covenants within the context of the Judaisms of the ancient world.  He refers to God’s enduring faithfulness and presence within and throughout the whole creation. The continued covenant to which Paul refers expresses the very nature of God’s loving kindness. Those who act righteously by welcoming the stranger and the most vulnerable are never cut off from God’s promises. To those who would have imagined that welcoming the religious outsider would relax one’s practice of righteousness, Paul responded with the insistence that the righteous action of faith is this welcoming action. There can be no conflict between the two, for him.

Ultimately, I think that what Paul is preaching among the Corinthians and to us is Jesus’ message of the cross; of the vulnerability of love and priority of reconciliation. For Paul, the crucified Jesus reveals God’s nature and the fullness of human nature that all are called to be. To say this, however, does not have to create a point of division among faiths.  We can draw upon Paul’s writings to affirm God’s nature of loving kindness and openness to vulnerability while affirming the fullness of God in other religions.  The way Paul wrestled with and affirmed different ways of practicing one’s faith in the ancient world can invite us to cross well-established boundaries of creed and clan. 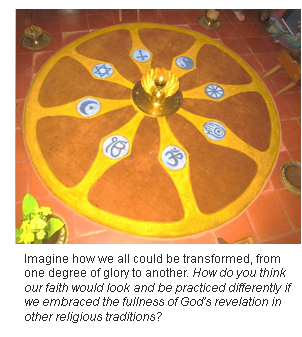 So how then would our faith tradition look and be practiced differently?  The picture that you see here was taken at an Interfaith Ashram in Kerala, India.

I have visited there with students in Bellarmine’s Master of Arts in Spirituality program.  One of the reasons that we travel together to India is because we can learn more about what it is like to be Christian in a country where Christianity is a minority religion.  The purpose of the interfaith ashram is to practice peace, to learn how all religious believers can live together well, and to pray.  All believers come into the circle of this chapel as equals. Their sacred texts hold a place of honor in the circle, and people come together to pray for the world’s deep places of need. Fr. John Pozhathuparambil, our faithful Franciscan guide as we travel in India, attributes his understanding of the interfaith spiritual journey to Mother Teresa.  He says that the central message of the interfaith spiritual journey is this: