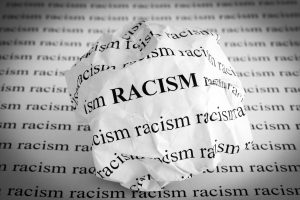 Anxious to talk about it?

I am not very much anxious to talk about racial issues because to bring back memories of unpleasant experiences hurts.

I grew up in Korea, where only Koreans and some Asians lived; very few foreigners stayed or visited. Not only I did not have much interaction with people other than Korean or Chinese, but racial discrimination was not a common issue to think about or discuss.

But the racial experience after I came to the United States was different. I arrived in Boston with my parents when I was a teenager. Fortunately, Boston was a place of diversity, full of students from everywhere on earth. I was not treated like an alien from another planet. But still, here and there, some white people acted superior, treating people of color differently.

When I was in college, one of my classmates at first seemed kind and funny. But from time to time, she would give me a dirty look and whisper foul words in my ears—words such as “chink,” “jerk,” “weirdo,” “bitch” and “f__k you.” She said these things with a grin on her face. At first, I had no idea what she was saying, because I never learned those English words at my Korean high school. When I asked my roommate what the other girl was saying, she was shocked and hesitant to explain what those words meant, and when and to whom some people might say them.

I faced this non-textbook language in a hard way. I tried to ignore it and not to think about why she was saying those things. Still, I was hurt, and I was confused by the hypocrisy. How could she say such ugly words with a smile? If I talked about this discrimination to friends or family, they all said, “Ignore it.” With a deep sigh, they would say, “Just don’t deal with that kind of person.” It is easy to say, “Ignore it,” but the hateful treatment still deeply hurt my feelings.

Yes, I dealt with it and tried to ignore the pain and uneasy feelings I had. Yes, I still fought for the value of diversity and in defense of marginalized people’s positions and voices. But I worried about my children. I kept praying, “Please be with my children. I pray that they won’t experience or carry the ethnic minority’s disadvantage, troubles or burden that they were born with.”

And when this issue did finally fall to my kids, it affected me very differently. I felt anger, anxiety, pain. I was furious, lost, mad, heartbroken. I cried. I felt helpless. Poor baby! I felt guilty for what they had to inherit and that they had to go through the same path I had gone.

When my baby son “P” was in high school, he had no self-esteem and was anxious about going to school; he carried a heavy feeling of something. I knew something was not right, so I kept asking what was bothering him. At first, he refused to tell me anything, but later he said, “Mom, you don’t know anything how my life is at school,” and he cried. My heart sank, and his brother, my older son “S,” told me what he witnessed at school. P was pushed against the wall by one of his classmates, was called “Chink” and “Jap,” and told to “go back home.”

Sound familiar? “Yankee, go home!” Where did those young students learn to say that? How and when did they learn it? They heard it from adults and through TV, movies and other media, from this society.

There was nothing I could comfort him with. The only thing I could tell him was, “It is all right. You look different because God created everyone to be different. You are special.” Do you think he was comforted by what I said? NO! That was only an excuse that a mom makes to keep her child from having to face the harsh reality. As a mom, I was helpless, powerless to protect or fight back or win over the white privileged majority. These ethnic and racial harassments led to identity issues with my children. They are officially American but treated as foreigners because of their looks and the color of their skin. What am I? Am I an American or not?

Yes, within God’s hands, they have grown up healthy and beautiful without much of a problem, so far. They might have done what I did—ignore the pain or turn their face away from it, not fighting back when bullied or mistreated because they looked different and swallowing their anger inside their heart. They have learned how it feels when someone is treated unfairly for any reason, and thus, I pray, they can be tolerant and embracing to others.

At least I give credit to PW’s Racial Equity and Justice and Peace committees. They are committed to fighting against racial discrimination and to sharing the painful indignity of being mistreated by white people’s privileged attitude toward other human races.

Every day we face the news about racial issues here and there. Even leaders of this society are not free from racial issues. No one is supreme over anyone under God.

Hanna Cho is the Korean American Member-at-Large representative on the Churchwide Board of Directors of Presbyterian Women, Inc. She lives in Hingham, MA.