Culinary delights were definitely a highlight of the USA Mission Experience (USAME) to the Finger Lakes Region of New York. Most church and home dinners served during the USAME included salt potatoes. 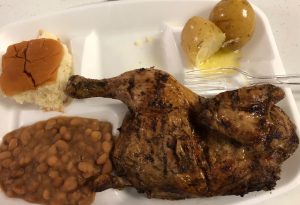 Virginia Champlin, a New Yorker on the USAME planning team, shares her recipe for these briny and buttery spuds, and a spin on the regionally renowned “Cornell Chicken.”

Bring a large pot of very salty water to a boil. (One recipe suggests one cup of salt to six cups of water!) Carefully place a pound or two of small (preferably young) unpeeled potatoes into the briskly boiling water (don’t start them in cold water, advises Virginia). Boil until fork-tender. Melt a stick of butter in another pan. Once the potatoes are fully cooked, toss with butter, and place in a serving dish.

The barbecue chicken dish served at West Fayette Presbyterian Church was a big hit as well. The Cornell Chicken Barbecue Sauce recipe, says Virginia, was developed at Cornell University in Ithaca, and is extremely popular (along with salt potatoes, a roll and a vegetable) at regional church fundraisers.

Add other ingredients and stir.

To barbecue chicken, soak chicken in the sauce (in the refrigerator) for at least an hour or more before grilling. While grilling, baste often. (Tofu loves this sauce too!)