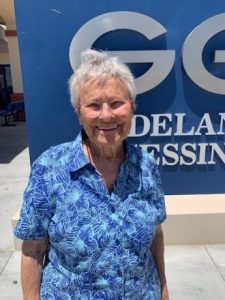 Merilie Robertson is a Presbyterian Woman who embodies the phrase “faith in action.” In October 2019, the Presbyterian Peace Fellowship (PPF) honored Merilie with their annual Anne Barstow and Tom Driver Award for Excellence in Nonviolent Direct Action in Retirement. It’s a long title to lift up remarkable role models and elders who use their retirement years to work for peace with justice.

I attended an event in February 2019 in Southern California called “Peace-ing It Together,” hosted by the presbyteries of San Fernando and San Gabriel. I had heard Merilie’s name through my work with PPF, but it wasn’t until that conference that I met Merilie and got to see why everyone always spoke of her with admiration and affection.

While at the conference, I went to a workshop that Merilie led about supporting migrants who are in detention. Merilie was passionate and unwavering in her commitment to lifting up the stories of migrants, inviting others to participate in visitations and advocacy against detention. One or two men in the workshop pushed back on the work, citing anti-immigrant talking points we’ve all heard and that don’t need to be repeated here. However, Merilie was unflappable and was clear that Jesus calls us to visit those in prison in Matthew 25. Visiting migrants in detention is a Gospel call.

Here’s what I was most impressed by in Merilie’s workshop: She kept the focus on migrants and what they are asking of those of us who want to be allies. She invited us to participate in interpersonal connection with migrants in detention through visitation and work on a structural level to call for the end of detention through advocacy and activism. She modeled solidarity, not white saviorism; she showed us that meaningful change comes through relationships and activism.

In addition to her long involvement with PW, Merilie has worked for peace and justice within the Church for her whole life. Through the Presbyterian Board of Foreign Missions (a previous iteration of Presbyterian World Mission), Merilie lived and taught in Pakistan and Iran for over two decades until the revolution in Iran. At that time, she returned to the United States.

When she returned to the United States, her sister invited her to become active in racial justice and nuclear disarmament issues. Merilie supported these issues and became deeply involved in the movement for justice and solidarity in Central America, learning that the CIA, who had engineered the coup in Iran, did the same thing in Guatemala. Merilie accompanied a pastor in Guatemala who was receiving death threats. When she returned to the United States again, she became more deeply involved in justice for migrants, many of whom were coming from Central America to flee violence caused in part by US foreign policy.

The Anne Barstow and Tom Driver Award for Excellence in Nonviolent Direct Action were created in 2014 by the Presbyterian Peace Fellowship to specifically honor those who have taken significant risks in their retirement for the cause of nonviolent peacemaking. PPF desires to celebrate these leaders of our movement and honor them in their local hometown or location where their primary peacemaking work took place. In its inaugural year, the award was named the Anne Barstow and Tom Driver to commemorate two of our key leaders in nonviolent peacemaking. The dedication ceremony was held near New York City, which was their primary place of peacemaking activities for decades. 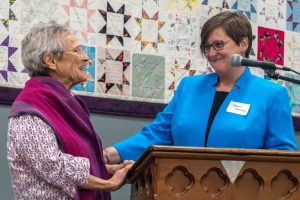 The celebration of Merilie was held at First Presbyterian Church of Encino, CA, on October 26, 2019. Rick Ufford-Chase was a keynote speaker. Click here to view Rick’s address at the celebration. He spoke about the need for the Church to have courage and creativity in addressing our past of white supremacy and colonialism. Almost 100 people were in attendance to celebrate Merilie. An offering taken at the dinner supported the Presbyterian Peace Fellowship Accompaniment Program and Freedom for Immigrants, with who Merilie volunteers.

Merilie has been both model and mentor to many, including Sara Pottschmidt-Lisherness, current Director of Compassion, Peace, and Justice of the Presbyterian Mission Agency. Sara said of her: “Merilie models what it means to be a global citizen. Her witness profoundly changed the course of my life, and I know I am not alone.”

Merilie’s life and friendship continue to inspire many, especially many young women in the Presbyterian Church, to commit to lives of nonviolence and steadfast solidarity with people who seek the freedom and right to migrate, to access education, and to strive for peace. Thanks be to God for Merilie Roberston!

Rev. Emily Brewer is the executive director of the Presbyterian Peace Fellowship. She is a graduate of Union Theological Seminary in the City of New York (2015) and Maryville College (2009). Before joining staff of the Presbyterian Peace Fellowship, Emily participated in PPF by serving on the National Committee, interning at General Assembly, serving as an accompanier in Colombia, attending several demonstrations at the School of the Americas, and traveling with a delegation to Palestine and Israel. Emily became committed to peacemaking during her two years as a PC(USA) Young Adult Volunteer in Guatemala and Nashville. Emily lives in Brooklyn but will always consider East Tennessee home.