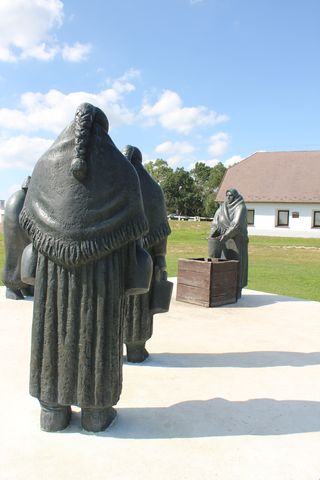 Every PW gathering invited women and men into the study in a distinctive way that reflected the identity of the presbytery, synod, congregation, and region sponsoring the event.  A participant in the workshop organized by Columbia Seminary’s continuing education program suggested that I write about the varying points interest and debate that I encountered at different gatherings throughout the summer.

Women who gathered at Stony Point Conference Center in May were particularly engaged in the interfaith dialogue represented in the study.   I expanded that conversation on Lesson Three of the DVD in response to many of their comments.   In some regions, such as Alabama, Georgia, and North Carolina, the discussion of interfaith dialogue and religious pluralism was less familiar and challenged long-held beliefs.  This conversation will be ongoing on the blog as we investigate together the importance of Paul’s Jewishness for our understanding of contemporary Christian beliefs.  It was helpful in those conversations to start the discussion by reading the beginning of Lesson Nine where I reference a story told by Barbara Brown Taylor.  Others, particularly in Kansas City, found the ecumenical dimension of the study welcoming as many women come to the Presbyterian Church from a wide variety of other churches, including Catholic and Orthodox communities of faith. Conversations at all of the summer events were rich and engaging and extended the circle of interpreters introduced in the study itself.

I also learned that churches use the study in a variety of ways.  Often PW circles pattern their discussions in line with the traditional nine-month academic year.  Several churches have adopted Reconciling Paul as the curriculum for their entire adult Christian Education program.  Some opt for a more intensive study over a shorter period, planning five-week or seven-week sessions.

Whatever format you choose, an important beginning point for your study is to consider the meaning of the title.  You may observe that “Reconciling Paul” can be taken in two ways.  The title accentuates the churches’ need to reconcile with Paul and invites us to wrestle with our love-hate relationship with Paul.  Paul’s writings are some of the most influential in the Christian community.   There is a long history of interpretation of the letters that he wrote.  When selectively read, Paul’s writings have been used to condone exclusion, bondage, and the control of others.  However, I want to suggest in this study that Paul is all too often misinterpreted and misunderstood.  The title also emphasizes Paul as an agent of reconciliation, one who embodies reconciliation, love, and healing.   Paul was a man who dealt with conflict and remained in the community, a Jew, a colonized apostle, an agent of change, and a traveler across geographical borders and social boundaries in the ancient world.

One of the things I love most about traveling is the opportunity to encounter people and places with very different experiences and stories than my own.  These encounters always expand my view and circle of concern and community.  The picture posted here was taken by my husband, Lee, at Hortobágy in Hungary.  We lived in Hungary in the fall of 2010 while I served as a Fulbright lecturer at a Reformed university in the city of Debrecen.  Hortobágy is not far from Debrecen, easily reached by bus, and well-known as a World Heritage site.  What intrigues me about these statues is that the women are gathering in community as they look out over the plains.  I can only imagine what they may be thinking or saying.

As you and your group gather in community over weeks or the next nine months, you now will travel into the ancient world and into the study itself as you read and discuss 2 Corinthians and each lesson.  When you encounter points of debate I invite you to look to each other in community, allow difference to kindle your theological imagination, and consider what God may be calling you to do where you live.

Earlier I briefly described my encounters in different regions with varying points of interest and debate emerging in relation to Reconciling Paul.  What have you been hearing or talking about in relation to this study in your PW group, congregation, presbytery or synod?  Where will you invite the women and men in your study group to kindle their theological imagination and consider where you can be a healing and reconciling presence in your church or local community? You can post your comments here.  I look forward to continuing the conversation.