Key Idea: How are we being called to continue Jesus’ acts of reconciliation and embody Jesus’ love and healing?

Throughout the year we have been wrestling together with the meaning of Paul’s identity as a Jew and a follower of Jesus. Emphasizing, accentuating, and being challenged by Paul’s identity as a member of a minority group and a colonized apostle living in one of the most powerful empires of the ancient world helps us to discover the radical priority of God’s grace in community.

“Charis,” the Greek term for grace Paul uses in his letters, is similar in connotation to the Hebrew word “hesed” and refers to God’s loving kindness known among people who band together to share and care for those who are most vulnerable. In 2 Corinthians 12:1–10, the text for Lesson Nine, Paul writes about vulnerability by using the image of a thorn in his flesh. Whatever Paul’s personal thorn was, it bothered Paul immensely. He had to get rid of it. He prayed earnestly to be rid of it. Have you ever had a similar experience? I know that I have.

Like most people, Paul probably felt like he had the right to be relieved of his affliction. He had the right to ask “Why me?” Maybe he even wanted to blame God for the affliction he experienced. Who wouldn’t ask God to remove a thorn from one’s flesh? In this passage, Paul doesn’t yield to the temptation to blame his affliction on God; the suffering he felt as a result of this thorn was not from God. The experience illuminated for him a message from God, but he didn’t believe that God was causing it. Paul compares the thorn to a messenger from Satan.

Personally, I don’t believe in literal demons, but I do believe that we as human beings can be the perpetrators of tremendous destruction. We bear responsibility for the suffering we inflict upon others. Paul would seem to agree. He was willing to ask why some evil, like a thorn in the flesh, happens and yet he was not satisfied with the response that God has God’s reasons. The answer to the question he asks about why God doesn’t remove the thorn in his flesh is this: “My grace is sufficient for you, for power is made perfect in weakness” (2 Cor. 12:9). Paul points to God’s own self-limitation and to the call for God’s love to be embodied in community.

Here is where we have to dig a bit deeper. Paul is writing from the perspective of and to people who lived in poverty, the teeming underclass of the Roman Empire. That shifts our perspective of his writings quite a bit. So much of the tradition of Christian theological reflection on Paul and his writings emphasizes his strength, power, and authority as a leader when, as a Jew living in one of the most powerful empires of the ancient world, he was strong only in his weakness.

The culture of the United States, no matter where we live, will not let this concept of strength in weakness be easily understood. One of the best resources I have read recently to understand strength in weakness is one written by the great social mystic Howard Thurman. Thurman wrote Jesus and the Disinherited one of the key books used by Civil Rights Activists. He described living in U.S. society as living under siege. Thurman’s aim was to sustain himself despite the ravages inflicted upon him by society; to prevent the springs of his inner being from being polluted by the “bitter waters that flow as drainage from the tablelands of violence and hatred.” For Thurman, one’s concern with the imperative toward social action is not only about the improvement of society, but “an expression of resistance against whatever tends to, or separates one from, the experience of God who is the very ground of [one’s] being” (Thurman, “Mysticism and Social Action,” 9). When the thorns of economic injustice, war, militarism, racism, competition, and violence constantly surround us, there is a tendency to become numb to the damage it inflicts upon our inner being and in our communities. Paul’s understanding of God’s grace is a radical reversal of that dominant way of life: find strength in weakness, be vulnerable to others, open yourself up to authentic community, challenge yourself to embody grace.

Where are there thorns in our flesh that need to be removed? Where do you see glimpses of and encounter grace today in our time? How can we, as people of faith, continue to embody God’s grace? These are some of the most important questions that I hope to leave Presbyterian Women with now at the end of this study. I hope that you will continue the conversation within your own study group or by posting your thoughts here. 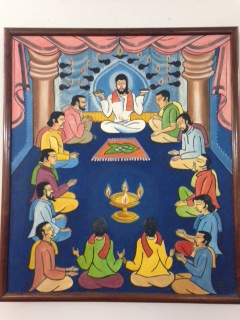 This picture of communion hangs in the dining room of the Franciscan Community in Karakutty, Kerala in India where Elizabeth has visited with students. It represents another depiction of “church in the round,” a concept discussed in Lesson Nine.