Who Is Jesus According to John?

I know that years have dimmed my memory of preteen angst, but sitting here and now at this keyboard, I recall my preteen years as (mostly) happy times. I fondly remember giggling with friends, finding fun things to do and books to read, and enjoying the process of learning and exploring. My favorite pastimes were playing jacks, singing silly songs to my pug, pestering my brother, and practicing scales and arpeggios on my flute. I also recall spending many contented hours trying to perfect creations made from string, a sort of macramé never intended to be a belt or plant holder, but instead a fleeting miracle of achievement and delight. The only tools necessary to make these amazing creations were twine or yarn, flexible hands, and hours of patience creating or re-creating string figures. As a young person, I had all of these things in plenty! I handily (pun intended) perfected Cup and Saucer, but the achievement of transforming simple string into a delightfully complicated Jacob’s Ladder never was one I could claim. (If you are interested in string games, you may find information and ideas on Pinterest. And I just discovered thanks to a quick glance at Amazon that books are available, too, including Cat’s Cradle: A Book of String Figures by Anne Akers Johnson.) Jacob’s Ladder was the most complex string game I knew of. And I liked that the image of the string ladder reminded me of a Sunday school handout, a brightly colored ladder to heaven etched into my young memory. 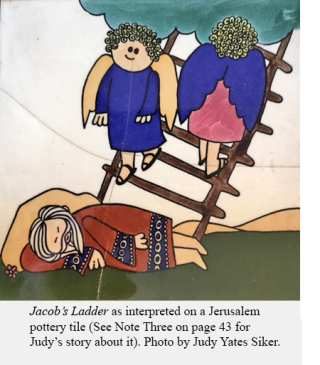 All of these pleasing memories—even the frustration of never achieving a decent string version of Jacob’s Ladder—came flooding back to me when I read Judy Siker’s words, “And Jesus identifies himself as the Son of Man on whom the angels of God ascend and descend. (Jn. 1:51) In other words, Jesus is like Jacob’s ladder, the connecting point between the heavenly and earthly realms.” (page 43)

When Jacob’s ladder was described in the Old Testament, the ladder was an actual ladder where angels traveled back and forth between earth and heaven, gliding upward and downward, over and beyond. What an image! “And he dreamed, and behold a ladder set up on the earth, and the top of it reached to heaven: and behold the angels of God ascending and descending on it” (Gen. 28:12, KJV). Standing just above the top rungs of Jacob’s ladder was God, who proclaimed to Jacob, “And, behold, I am with thee….” (Gen. 28:15a). When Jacob eventually awakened, he exclaimed, “Surely the Lord is in this place and I knew it not.” (Gen. 28:16) That’s the rub. The ladder was no less real even though Jacob never realized its existence until the Divine revealed it to him during a fitful dream. This celestially traveled ladder, teeming with heavenly creatures, was ever in Jacob’s midst even though he never realized it.

Someone somewhere remarked on his work in emergency services that during times of great distress, the veil thins between this world and the next. Are we, like Jacob, rarely able to see that there is more to reality than just what we can prove with our five senses? I am reminded of the verse from 1 Corinthians: “For now we see in a mirror, dimly, but then we will see face to face. Now I only know in part; then I will know fully, even as I have been fully known.” (1 Cor. 13:12, NRSV)

I recently watched a video clip from a rabbi who suggested that we are freely given choice by the Divine whether to believe or not. The choice is ours. But choosing is of great importance because whatever our choice, how we experience and see the world will be as accordingly. Believing in a benevolent Creator allows our Creator space in our lives and our lenses through which we view the world will reflect this worldview. Alternatively, not believing in a merciful God but instead spending our finite hours and days pursuing [insert viewpoint here] will color our world accordingly. For example, if we see the world as a place that is rooted in the pursuit of material gain, then everything we see will be interpreted as a commodity or opportunity. Put another way, what we choose to see colors our world in a particular way. Belief as I interpret it through revisiting Jacob and his ladder and reading anew John and our Bible study, gives us the ability to see as God would prefer that we see.

But there is more to this story than just perception. Understanding Jesus through the lens of John is to understand that Jesus is both human and divine; furthermore, Jesus is the bridge, the path, to God for humanity. Seeing Jesus through John’s gospel through the image of Jacob’s ladder suggests that this world and the heavenly realm exist in the same place, separately by the thinnest of a veils. According to John, Christ is the ladder, the bridge. As Judy Siker writes in the study, “Jesus in John’s Gospel provides the sustenance of life (bread, light, drink) as well as the guidance that leads his followers into the fullness of life (the good shepherd, the gate, the way/truth/life, the resurrection and the life). God provides all these things through Jesus, not only at a surface level but at a very deep level.” (page 46)

During my seemingly (from a distance) carefree days of preadolescence when I had time to practice my string Jacob’s Ladder, I knew very little about the significance of this image. Decades later, I see. Like children who have no understanding of how their parents provide even the most basic of necessities, I was and am confident of a merciful God who created and cares about all of creation. Jesus, both human and divine, is the bridge to life eternal. Judy Siker writes, “The Gospel of John concludes with a blessing on those who have not seen and yet have come to believe. This idea of the blessing of spiritual sight and spiritual understanding runs throughout John’s Gospel, and we begin to understand who Jesus is—the Word of God made flesh, who dwells among us.” (page 47)